The apartment in the Blue Tower is the only one of Strindberg’s 24 homes in Stockholm that you can see today. Strindberg lived here between 1908 and 1912. The house at No 85 Drottninggatan was newly erected (1907), drawn by the architect’s office Hagström & Ekman, with all modern conveniences including central heating, water closets, and an elevator. The apartment had no kitchen though; Strindberg rented it from Falkner’s family hotel on the fifth floor and had his food sent down. But as the hotel closed down its business after a while, he had to get his meals from a nearby restaurant. Furniture and other objects were bought in the main between 1909 and 1910. This part of the museum is a reconstruction of Strindberg’s apartment; most of the furniture are original, wall paper and textiles are copies. 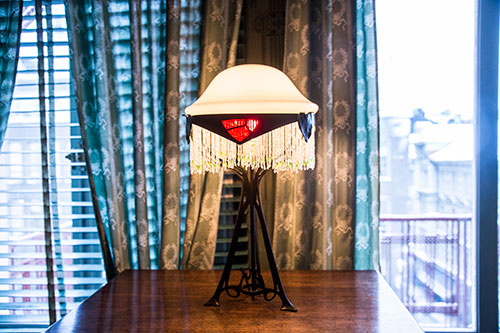 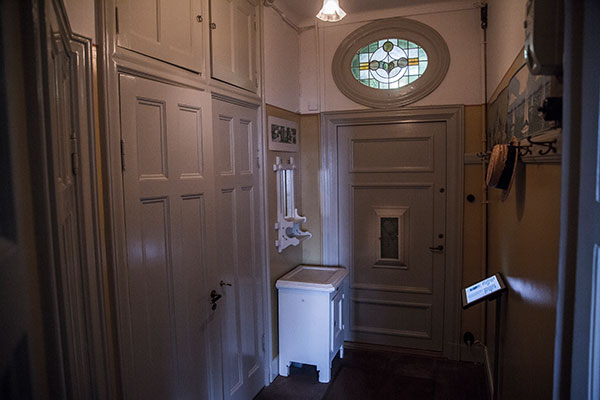 Strindberg put up cheap, printed wallpaper friezes with mildly romanticizing motifs in the foyer. The water-colour painting is a copy of the Oscar Björck painting in the entrance hall of Dramaten (the Royal Dramatic Theatre). Below this painting stands an ice-box that used to hold chilled drinks.

On his sixtieth birthday (January 22, 1909), and again on his sixty-third birthday in 1912, Strindberg was honored with a great torchlight procession. In a letter to his friend Richard Bergh, Strindberg declared that on account of illness he would not be able to take the salutes in person. Instead he would place his ‘beautiful electrical lamp with the red eye pointíng towards Tegnérlunden, so that the torch- bearing crowd would recognise his balcony’. Still on the day of celebration Strindberg appeared together with his daughter Anne-Marie on the balcony outside his bedroom to receive the people´s laud. August Strindberg died in his bed after lingering illness on May 14, 1912. 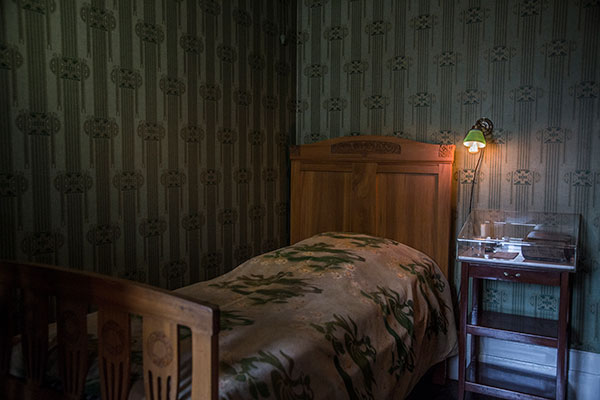 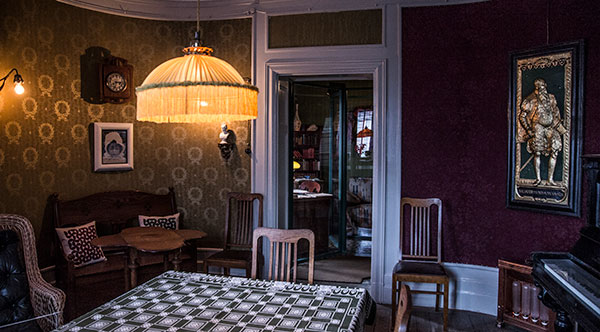 Strindberg furnished his rooms in a way as stage sets from his own plays. The colour scheme in the dining-room bright yellow, green, and red typifies this decorative plan. There are two small busts of Goethe and Schiller, and over the piano hangs a mask of Beethoven, his favourite composer. The suite of wicker furniture beneath the potted palm was called ‘Lagerlunden’ (the Laurel Grove) by Strindberg, after a well-known café close to Operakällaren, frequented by actors and authors. Above the sofa hangs a photo of his daughter Anne-Marie.

Strindberg kept meticulous order on his desk. The present arrangement is exactly as it was at the time of his death. In his study, as well as in the attic library, Strindberg used no electric lighting only kerosene lamps and wax candles in candlesticks shaped as female bodies. Strindberg’s writing materials were of the highest quality: British steel nibs, French ink and hand made paper from Lessebo. 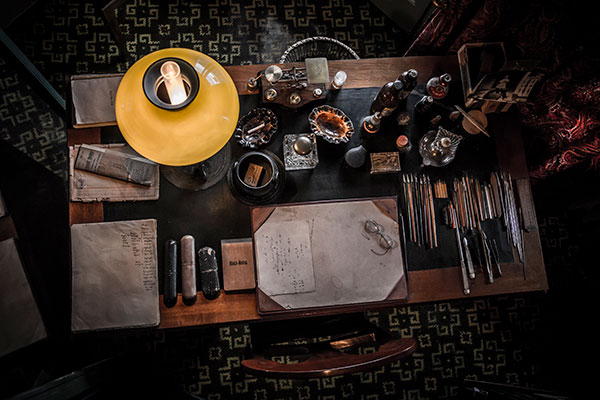